CMA/ICE & DUST AWAY is the most non-corrosive de-icer

Corrosion on construction and vehicles is a problem on the Storebælt bridge in Denmark. CMA ICE & DUST AWAY were used and tested as an alternative deicing solution and proved to have no co corrosive effect.

Before the opening of the Storebælt bridge connection in 1998, Storebælt has investigated the market for de-icer agents to find alternatives for sodium chloride. This was justified by wish to avoid corrosive effects of sodium chloride on the constructions.

From the first winter season there were used deicers in the form of:

The overall experience with calcium magnesium acetate and potassium formate was good with few exceptions:

To help to overcome this difficulty, Storebælt has used two large self-driving sweepers that were mounted in the snowmobile column between the snow plows and the salt spreaders. The sweepers’ task was to remove the remaining snow left by snow plows, and thus they reduced the consumption of the de-icer agent.

The test of the long-term corrosion

The test of the long-term corrosion effect of de-icers is usually performed by an accelerated 7 days trials.

Assuming, that the actual corrosion course could differ from the results of this test, simple experiments were initiated in December 2001, where the long-term impact of calcium magnesium acetate, potassium formate and sodium chloride were examined on galvanized items.

After 30 months the tested subjects were visually evaluated to determine the effect of corrosion.

The results and conclusions of short term trials

It was stated, that the items sprayed with a 22% sodium chloride solution or calcium magnesium acetate solution showed signs of white rust on surfaces, and rust on some point shaped areas.

The subject sprayed with a 30% potassium formate solution showed clear signs on rust along edges as well as around the bolts.

When the tested items were disconnected into two halves, the corrosion degree between the panels was almost identical.

It was assessed, that this occurred since the environment in that area of the tested items was moist and there was still residue of the deicer agent between the two halves.

The results and conclusions after long term trials

Storebælt’s own long-term trials show in 2017, 16 years after they were initiated, that the subjects treated with CMA showed no sign of corrosion.

The subjects that have been treated with a 30% potassium formate solution have clear signs of corrosion in larger and smaller areas throughout the subject.

The subject that has been treated with a 22% sodium chloride solution has corrosion around the edges, while surfaces are not significantly corroded.

Source: Guidelines on use of Deicers, National Road Committee, 2017

Meet us at AquaSur the leading exhibition for aquaculture professionals 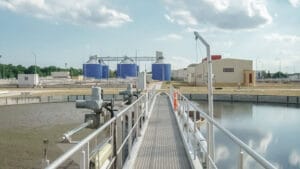 Sludge treatment solution for wastewater treatment plant in BC, Canada

This website uses cookies to improve your experience while you navigate through the website. Out of these, the cookies that are categorized as necessary are stored on your browser as they are essential for the working of basic functionalities of the website. We also use third-party cookies that help us analyze and understand how you use this website. These cookies will be stored in your browser only with your consent. You also have the option to opt-out of these cookies. But opting out of some of these cookies may affect your browsing experience.
Necessary Always Enabled
Necessary cookies are absolutely essential for the website to function properly. This category only includes cookies that ensures basic functionalities and security features of the website. These cookies do not store any personal information.
Non-necessary
Any cookies that may not be particularly necessary for the website to function and is used specifically to collect user personal data via analytics, ads, other embedded contents are termed as non-necessary cookies. It is mandatory to procure user consent prior to running these cookies on your website.
SAVE & ACCEPT