Dust suppression for a better health

Particle contamination is an increasing problem in major cities, where the particles in the air (PM10) are above EU threshold values.

According to EU’s Thematic Strategy on Air Pollution more than 300,000 EU citizens die every year due to particle pollution. The EU has estimated that the health-related economic cost can be as high as 609 billion EUR annually in 2020 if we don’t do anything. That corresponds to 1,350 EUR per EU-citizen.

By suppressing the dust released from, for example, roads and construction sites, the air won’t be as polluted resulting in fewer health-related economic costs. Our liquid product for dust control, ICE & DUST-AWAY, can effectively reduce the amount of dust released from cities, roads, construction and demolition sites by 35 % in average.

A safe and eco-friendly dust binder

ICE & DUST-AWAY is a liquid dust binder, based on calcium magnesium acetate (CMA). Both calcium and magnesium occur naturally in the ground, and acetate is easily degradable. Due to this eco-friendly formula ICE & DUST-AWAY has received the Nordic Ecolabel.

ICE & DUST-AWAY is safe and easy to use and its unique non-corrosive features makes it compatible with any surface or metal, including galvanized metal, and doesn’t leave any marks.

In London a series of measures has been taken to reduce particle contamination. The application of dust suppressants to road surfaces in priority areas is one of the local measures.

ICE & DUST-AWAY was applied along Victoria Embankment between Waterloo Bridge and Byward Street. An overall reduction in 24-hour PM10 concentrations was identified and calculated to be approximately 14%.

The most efficient dust binder

The effects of spraying with water were limited, but when the road was treated with ICE & DUST-AWAY, the PM10 contents dropped by an average 35 %. The explanation is, that CMA binds dust and particles, thus preventing them from being whirled into the air.

Stockholm City is also using ICE & DUST-AWAY during winter time on major roads leading into the city and in parts of the city, where they benefit from its de-icing capabilities.

Studies in Gothenburg, Sweden, and in Klagenfurt, Austria, have showed the same positive effect on the particle contamination in major cities.

Dust binder and de-icer in one product

It can be used on any surfaces and down to -30 °C. It’s non-corrosive and won’t harm cars, nature or our groundwater.

Using the same equipment and product makes it easy to handle and spares the environment.

Do you want to know more? 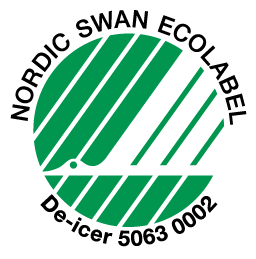 More details are available on these studies in the report “Evaluation of different
measures to reduce road dust emission in Stockholm” on www.simair.smhi.se

Contact us if you want to know more about our unique solution for reduction of Particulate Air Pollution.